Soups are something that are really good, super easy, inexpensive, and a great dinner to make when you want to clean out the frig. 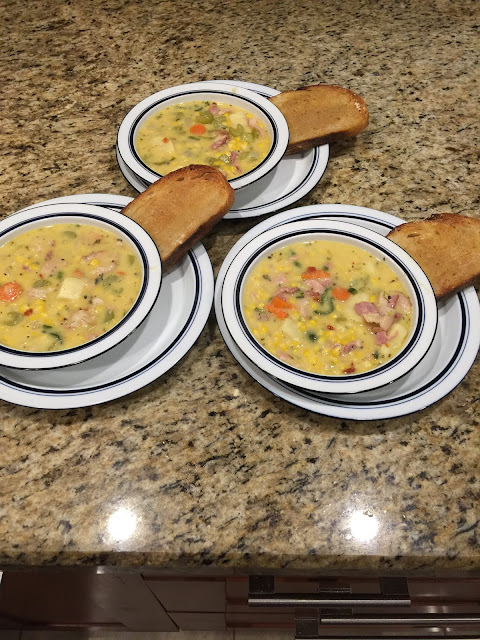 Actors in the play: 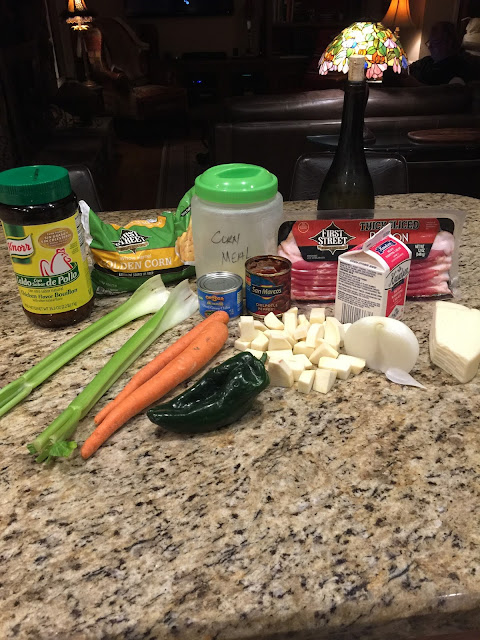 Start with the “trilogy,” onions, carrots, and celery.  The trilogy is the basic for almost all of my soup recipes. 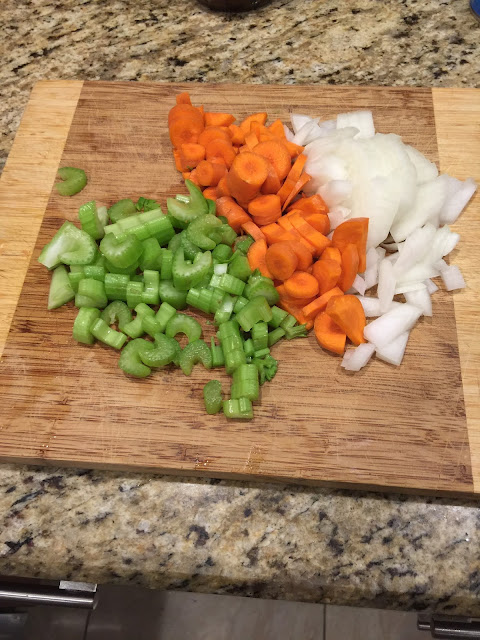 A little flavor with added heat.  A small can of diced chilies and 1 chipotle pepper in adobo. 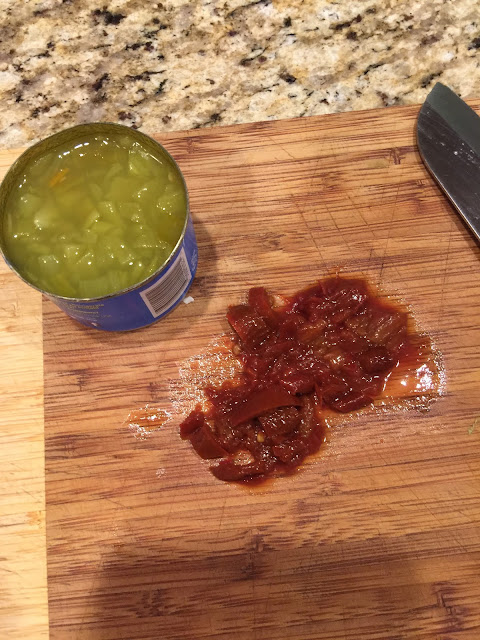 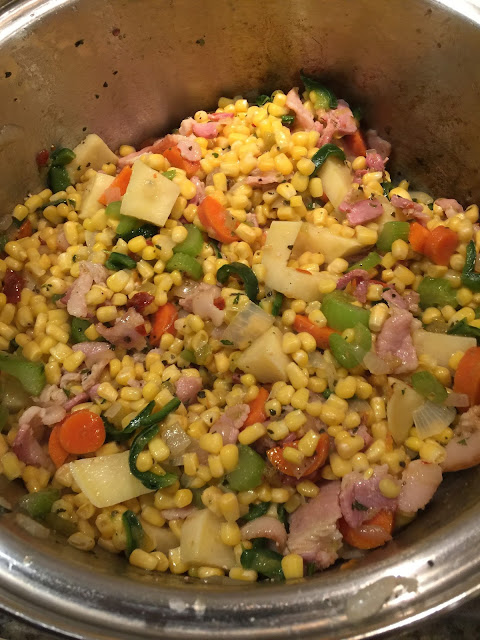 Finished chowder, ready to be served up. 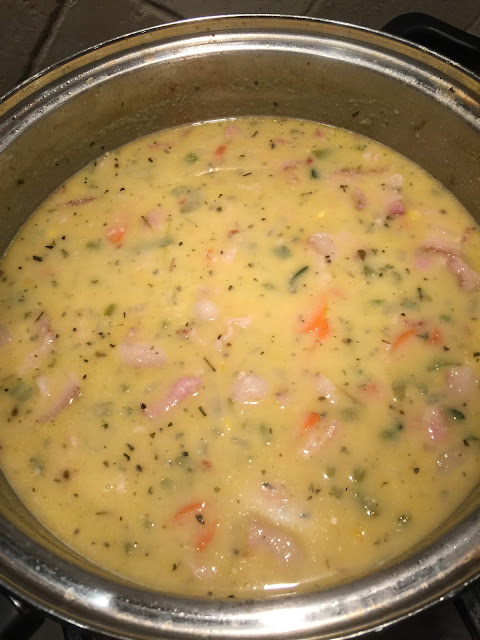 1 package bacon diced
Trilogy  (2 carrots, 2 sticks celery with leaves, 1 medium onion.  All diced.)
8 cups water
2 tbsp. chicken bouillon
2 pound bag of frozen corn
¼ cup cornmeal mixed with 2 tbsp. water
1 small can diced green chilies
1 chipotle pepper in adobo diced
I added 1 pasilla pepper and about a cup of diced sweet potato.  (Use what you have and make it your own.)
1 cup heavy cream.  (relax guys, won't hurt you)
2 cups of whatever cheese you have on hand, grated.  I used provolone.
About ½ cup white wine or sherry.  I prefer sherry but I was out.  Oh well, just add a little more wine.  I won’t tell.
2 tbsp. butter

Heat a large pot to medium high and add 2 tbsp. olive oil.  Add the trilogy and the diced bacon and cook until bacon starts to brown and the onions turn translucent.  Season with salt and pepper and a tbsp. Italian seasoning.  Add the wine or sherry and deglaze the pot.  Cook until liquid has evaporated.  Add the peppers and whatever other veggies you want to throw in as well as the frozen corn.  Stir and heat until corn is no longer frozen.  Mix 2 tbsp. chicken bouillon in 2 cups water and add to the veggies.  Stir until boiling.  Add the other 6 cups of water and bring to boil, stirring occasionally.  Mix the 2 tbsp. water with the cornmeal and add that to the soup and stir.  Simmer until vegetables are cooked to a soft texture.  Add 1 cup heavy cream (nothing wrong with heavy cream) and stir.  Add 2 tbsp. butter.  Bring to boil.  Remove from heat and stir in the grated cheese.  You can sprinkle with chopped cilantro and a dollop of sour cream if you wish, but I just didn’t have any.

Popular posts from this blog 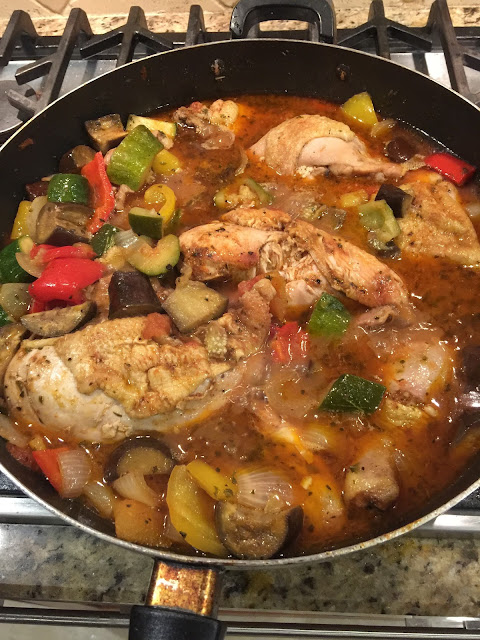 Emmy Lu’s helping 1 chicken cut into 8 pieces salt and pepper (you be the judge) paprika Italian seasoning The lovely and talented ½ stick of butter (divided) 4 tbsp. olive oil (divided) 4 tomatoes, blanched and peeled 4 small Italian egg plant 4 small Italian zucchini 2 small onions 1 red or orange bell pepper 1 green or yellow bell pepper ½ cup white wine Parmesan cheese to finish Salt and pepper the chicken on both sides and sprinkle with Italian seasoning and paprika  In a large sauté pan, melt ¼ stick butter and add 2 tbsp. olive oil.  Over medium high heat, cook the chicken until golden brown.   Remove to plate and set aside. Chop the vegetables in chunks and remove the seeds from the tomatoes.  To the sauté pan, add the rest of the butter and olive oil and scrape the goodies from the bottom of the pan.  Add the veggies to the pan.  I added a little more garlic (okay, 4 cloves).  Sauté until tomatoes start giving
Read more 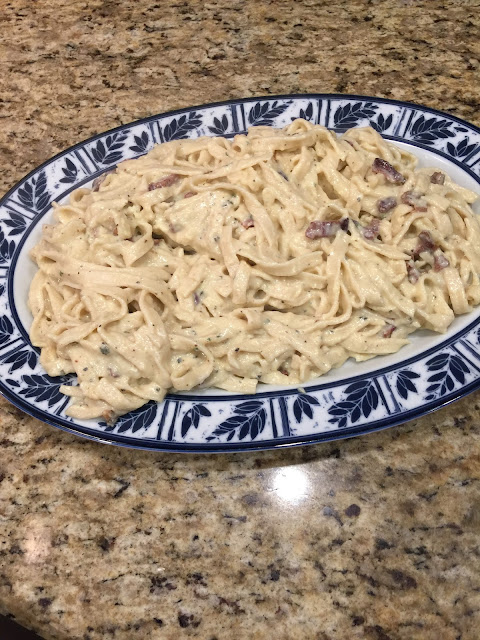 Start with your homemade fettuccine (see earlier pasta recipe) and start a large pot of generously salted water to boil. 1/2 pound pancetta and 2 - 4 cloves of garlic. I buy mine at the Italian deli in Little Italy. Add two swirls of  olive oil to a heated fry pan and slowly saute the pancetta and garlic. When all the fat has been rendered and everything is golden brown, pour off the oil and put back on the burner.  Add 1/4 cup of white wine.  Opps!! I added a little more.  Just to deglaze the pan don't ya know. Simmer until wine has evaporated.  In the meantime, grate about 2 cups of Parmesan.    To a medium mixing bowl add 3 large eggs plus one egg yolk.  Pepper generously and add half the parmesan, some Italian seasoning and mix thoroughly.  Isn't that the most pitiful whisk you've ever seen? When pasta is ready (opps, did I tell you to put the pasta in the boiling water?  Oh well, you'll  figure it out), reser
Read more 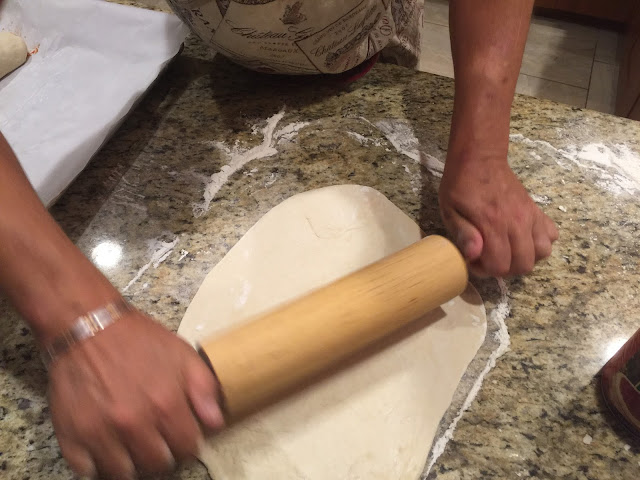 Basic pizza dough (see previous post) Pepperoni Salami Deli ham Arugula Pizza sauce or marinara sauce Parmesan cheese grated 1 egg with a tsp of water Follow the recipe for Basic Pizza Dough Divide the dough in two and on parchment paper roll each half into about a 10 x 16 inch rectangle. Using a spoon or spatula, spread the sauce over the dough leaving about a 3 inch area of dough clear on both the long side.  Begin layering the meats and cheese.   Top with arugula, a layer of ham, and a layer of cheese. Carefully roll the Stromboli and leave seam side down.  Transfer to baking sheet on the parchment paper.   Paint Stromboli with egg wash. Carefully slice slits for steam to escape. Sprinkle with cheese and parsley if you wish. Bake at 400 for 15 to 20 minutes.  Allow to cool slightly before carving. Cut and serve!  Enjoy!
Read more

Michael Olsen
Hi, I’m Michael Olsen. I live in beautiful San Diego, California with my husband of 29 years Mike, our three dogs, two horses, five chickens, and one Beta named Pesky. I was raised for the most part in Spokane, Washington and Anchorage, Alaska. I am the oldest of three with a sister and brother. I spend my days working as a Registered Nurse. I’m board certified in gerontological nursing, hospice and palliative care, and I’m a public health nurse. I think I have the best job in the world. I can get in my car every evening and say to myself, “I did something really good for someone today.” Mike and I are extremely active in our church. We’re both on several committees; Mike is on the board and is in charge of the weekly audio/visual. I’m a prayer chaplain, in the choir, a greeter and usher, and with several friends are remodeling the quiet garden. Occasionally, I’m blessed to be able to sing a solo or read the daily word to the congregants.